Japanese Tattoos in Goa: Best Tattooist in Goa – Design Options By Moksha tattoo Studio Goa Calangute: So you’ve decided that you want a Japanese tattoo. Congratulations. You’ve chosen a style of body art that’s rich with symbolism and has links to ancient Japanese traditions. The majority of Japanese tattoos consist heavily of written symbols which can be divided into three main categories.

Of the three types of Japanese tattoo symbols, Kanji is the most popular because it is so expressive and artistic. Each different Kanji symbol (of which there are reported to be more than 40,000) represents a specific idea or meaning. So by combining a number of different Kanji symbols in your tattoo design it’s possible to create a stylish and unique tattoo that expresses an unlimited number of ideas and messages.

Unlike Kanji symbols, which represent various ideas or meanings, Hiragana is a style of writing that’s used in everyday Japanese life. You’ll find it used in media such as newspapers and magazines, so it’s much more amenable to literal translation than Kanji.

In terms of design, the hiragana characters are more rounded than Kanji symbols, which is worth bearing in mind depending upon your artistic tastes. Hiragana writing is also known as cursive, so don’t get confused if you hear someone speaking about a cursive tattoo.

The system of Katakana is similar to Hiragana. Together they’re known as Kana and were originally based on the Kanji symbols which existed more than one thousand years ago. Since than they’ve developed into their present form and both Hiragana and Katakana each have their own set of 46 symbols with which to form their words.

The system of Katakana symbols is used almost exclusively to represent words that are non Japanese in origin. These symbols are similar to the system of hiragana with the main difference being that words in Katakana have sharper edges and are much more angular in appearance.

And that concludes the three types of Japanese tattoo symbols that are available. However, there’s no rule that says you have to choose one style and stick to it. You could have your tattoo designed so that it includes more than one of these styles. For example, you could have a sentence written using Hiragana that includes various Kanji symbols to enrich it with greater meaning.

But whatever option you select, it’s important to take one additional safety precaution before you go anywhere near a tattoo studio with your design. As you can see from this brief explanation of different character types, the system of Japanese writing is extremely complicated and subtle.

So unless you want to walk around wearing a Japanese tattoo that looks like a bad practical joke, if you don’t speak Japanese fluently, it’s vital to get an accurate translation of your design from a Japanese language expert.

It’s also a good idea to make sure that you find a tattoo artist who has experience forming the various Japanese characters and symbols.

The best way to find your perfect Japanese tattoo is to do your research and then think long and hard about it before you make your final decision.

Use the internet to look at as many different types and styles of Japanese tattoos as possible. Do some research on the culture and learn how the language operates. After that, spent time thinking about what ideas and meanings you want to express through your tattoo design.

Ultimately, the tattoos that people are most pleased with are those that have deep personal meaning or significance. 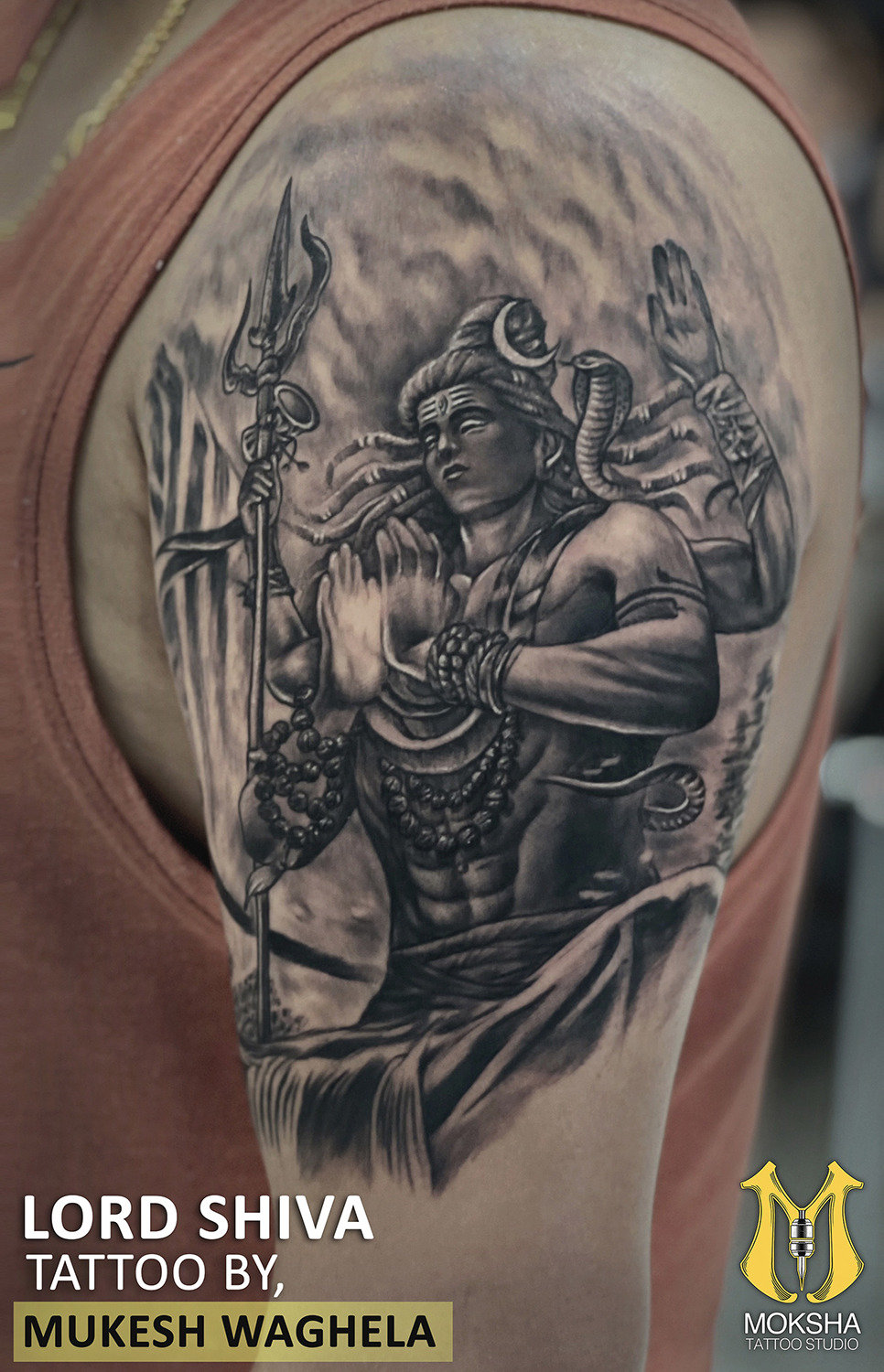 Popular Tattoo Artist in Goa Mukesh Waghela with 17 Years of Experience Best Tattoo Artist in Goa: Tattoos are a common thing these days. They are more popular than ever before. Research has shown that nearly 1 in 4 people have at least one tattoo. There are many designs to choose from, giving people a chance to be creative. Below, we will take a look at some of the most popular tattoo designs in Goa.

Lord Shiva Tattoos are among the most popular designs. They have been around for hundreds and hundreds of years and they are always evolving and becoming more and more complex with their designs and styles. Lord Shiva Tattoos can either be the traditional black style that cover the arms and the legs or the more colorful styles that can cover every area of the body. The colorful, more modern look is becoming more and more popular when compared to other styles.

The “old school” styles of tattoos are also popular. Anchors and things like that are making a great comeback these days and not just with sailors. These styles were very common and very popular back in the 60s. They are rapidly gaining their popularity back, as females and males are getting anchors and swallow designs tattooed on them more and more.

Lower back tattoos are the most common for women. The lower back is one of the most sexual and sensual areas on a women, making the ideal spot for a tattoo. Tribal designs are the most popular, although flowers, dragons, and other symbols make great tattoos as well. The lower back offers plenty of natural curves as well, which can make for an innovative tattoo. Often times, women tend to include tribal that spreads, covering the base of their hips as well.

Dragon designs are another popular type style of tattoos. They were popular in the past, and are now starting to get their popularity back. There are a lot of different dragons to choose from, including the mythical dragon and ancient Chinese dragon. Dragons are great on the chest for males and the back for females. Dragon tattoos can be virtually any size, although most males tend to have them cover one side of their chest or the upper region of their arms.

Celtic tattoos are also popular as well. They are mostly seen with those who have a Celtic heritage, although some with no Celtic heritage have them as well. They offer a variety of symbols and designs, providing universal meanings for everyone. Often times they are mixed with Lord Shiva Tattoos to create a more innovative tattoo.

There are several other types of tattoos out there, although the above are the most common. Tattoos can be very creative and innovative; it all depends on what you want. If you’re looking to stand out and be truly creative – you can always have a professional tattoo artist design one for you.

Moksha Tattoo is one of the biggest chains of tattoo studios in GOA, started by a well qualified artist Mr. Mukesh Waghela after obtaining a professional degree in tattoo making from Thailand Tattoo School in 2003. His passion for tattooing is so infectious that people with no inclination to get inked go back with his art embedded on their body!

Mukesh’s forte lies in Custom artwork, where he gets an opportunity to explore his creativity.

Artist Mukesh Waghela has an experience of 17 years and an international and national award-winning top rated tattoo artist in the Indian tattoo industry. He has won total of 38 tattoo awards till date and still counting.  He has served as a jury member/judging panel for several national and international tattoo festivals. Mukesh has inked several celebrities across the globe including Chris Gayle, Tapsee pannu, Raghu Ram and many more. Mukesh also hosts several tattoo trainings, seminars and workshops across the country. He is one of the senior and a living tattoo legend of Indian Tattoo Industry.